Oriental themes have become all too common among online and mobile slots. Multiple developers have infused Asian art into their slot creations over the last year, and while the motif is certainly being overdone, it’s more often the intricate qualities of new slots games that attract avid players to the reels. 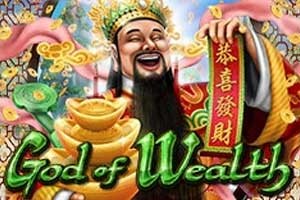 Based on Chinese folklore, God of Wealth stars Caishen, the proverbial God of prosperity, and is compatible with desktop and mobile platforms. Having just been released by RTG in January 2016, the game is not yet integrated at all of the brand’s near-100 licensed gaming sites, but it’s making the rounds quickly and should be up and running at the most reputable RTG casinos like Bovada very soon.

I spent a few hours playing the demo version of God of Wealth, getting a feel for the volatility and bonus features. Although I haven’t had the chance to put any real money down on it yet, in my experience, the win rate between demo and real-money play is negligible.

With that said, let’s take a closer look at the newest mobile slots from RTG.

God of Wealth is a 5×3 reel, 25 payline slot machine that offers a progressive jackpot and a bet range of $0.01 to $0.25 per payline ($0.25 to $6.25 with all lines active). Players are privy to Wilds, Scatters and a Free Games feature with some interesting – and lucrative – possibilities. 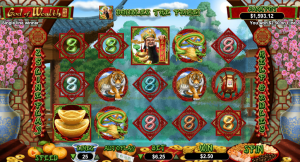 Caishen, the God of Wealth, is the Wild symbol. His visage takes the place of any other symbol (except Scatters) to produce the highest possible winning combination. During normal play (base game and free spins), he can only appear on the 3rd reel. However, when Caishen appears on the 3rd reel during free games, he gains the ability to spread to all other positions. More on that in a moment…

The Gold Ingots are Scatters in RTG’s new mobile slots. When 3 or more Gold Ingots appear anywhere on the reels, a special Pick Me bonus game is triggered. The player will select Gold Ingot icons from the screen (equivalent to the number on the reels that triggered the bonus) to earn up to 10 free spins per Gold Ingot. 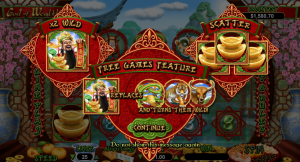 As the Free Spins begin, players will want to keep an eye out for the God of Wealth on reel 3. When he appears in this position, all Chinese Dragon, Ox and Tiger symbols on the reels will instantly be converted into Wild God of Wealth symbols. This is the only time in the game that Caishen is able to appear on reels 1, 2, 4 and 5.

Aside from the possibility of triggering the random progressive jackpot at the conclusion of any spin, the game’s profit potential is at its highest when this occurs. If you happen to land 5 Caishen symbols on a single payline, it’s worth a 10,000 credit payout.

Overall, I was disappointed by the lack of eye-popping graphics and, more importantly, the infrequency of triggering the pick me bonus. This new RTG slot only invokes genuine excitement during free spins, where I did manage to land Caishen on the 3rd reel several times for some nice winning combos, but probably not enough to get any real cash out of me when the game arrives at Bovada Casino.