Online casino sites in Canada are provincially run by their respective lottery organizations, which means only one website is legally prevailing over each territory where the activity is sanctioned. That is not the case in US states like New Jersey, where multiple licenses have been granted to casinos and internert operators. To ensure educated players are able to discern the regulated sites from unregulated ones, the NJ Division of Gaming Enforcement has issued a Seal of Approval that must appear on all state-authorized online gambling sites. 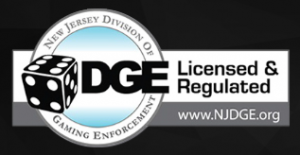 The new NJ-DGE Seal of Approval (pictured right) signifies to players that a gambling website is “Licensed and Regulated” by officials in New Jersey. The agency announced the release of the new official seal on Tuesday, the same day it appeared in the lower left-hand corner of the BorgataCasino.com website.

As far as I know, there hasn’t been any confusion among online gamblers in the Garden State as to which sites the state sanctions, and which ones they don’t, and there’s been no physical evidence to support the theory either. But according to some state officials, there is a perceived confusion among residents that warrants the integration of the DGE’s symbol.

It’s true, by displaying the new seal in clear and plain site on a New Jersey authorized online casino or poker room, players should easily be able to recognize that a site is state-licensed. But then again, BorgataCasino.com did not place the seal in ‘clear and plain’ site. It is pushed to the very bottom of the page, below the copyright material, alongside the links for responsible gaming and National Council for Problem Gambling.

If the player isn’t already aware that a DGE logo signifies regulation, they’re never going to find the seal anyway. It’s a stark contrast to Canadian online gambling sites, which exhibit the logo of their respective Lottery Corporation at the very top of the page.

The British Columbia Lottery Corporation displays the “bclc” emblem above the PlayNow.com logo. At Quebec’s EspaceJeux.com, “LottoQuebec.com” is the first thing visitors see in the top left corner. Ontario’s PlayOLG has the lottery organization’s name right in the website’s domain name, “OLG”, thus depicting it at the top of the main page as well.

The Rutgers Center for Gambling Studies released a report earlier this year indicating that the responsible gambling tools found on US gaming sites often go unused, if not unnoticed, concluding that their unremarkable placement on website’s is to blame. The research center has called for all responsible gambling/state-licensing cues to be positioned in higher, more visible locations.

None the less, the NJ DGE feels it’s taking appropriate measures to ensure the online gambling masses in the Garden State know when they are playing at a regulated site.

Interestingly enough, 888Poker NJ has been proudly professing its NJ licensure since day one, designing its own logo to signify regulation and placing it near the very center of the main page, where a visitor’s eyes are generally first drawn after pulling up a website.

888’s online poker partner, Caesars, which operates WSOP NJ, plus several online casinos in New Jersey, also took the high road, albeit not as quickly. The new DGE Seal of Approval is located at the very top of the website, just left of the login area.

However, PartyPoker NJ, like its Borgata sister-site, has the seal pushed to the bottom of its main page, out of sight and, in all likelihood, out of mind.