As kids, many of us dropped coin after coin into our favorite arcade machines simply because the games were fun. As adults, we do the same with slot machines, but this time around, it’s not sheer entertainment we seek. More importantly, we’re hoping to walk away with more money than we started. It’s not too often we get to experience the best of both worlds, but that changed when NextGen optimized one of its most comical online slots, Pandamania, for mobile and tablet casinos.

Pandamania was originally released for traditional online casino play in November of 2014. Still less than a year old, the game succeeded where so many other slots have failed by bringing together a multitude of favorable aspects that any slots fan can truly appreciate.

It has a multifarious theme that includes cute, cuddly animals, a theme-park style zoo complete with roller coasters, and a hilarious storyline that would make the Birdman of Alcatraz jealous. These pandas aren’t just silly animals looking for attention, they are plotting against the zookeepers to escape! Throw in some lucrative bonus games and free spins, plus the ability to play on the go with tablet casinos, and you’ve got the makings for a fantastic spin of the reels, anytime, anywhere.

Pandamania for Mobile and Tablet Casinos 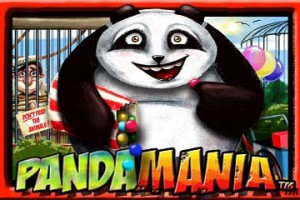 Pandamania is a 5 reel, 25 payline slot that accepts line bets in increments of $0.01 to $2, creating minimum/maximum bet limits of $0.01 to $50 per spin. Symbols include the Wild Panda, Zookeeper (tied and gagged, of course), Tickets to the Zoo, Candy Bag, Balloon/Treat Vendor Cart, and playing card symbols of A, K, Q, J, 10 and 9.

Remember, these Pandas are looking to escape from the zoo, and every once in a while they do. At random, escaped pandas may roll across the screen riding a treat cart, spinning out Wilds that take over random symbols across the reels.

Lining up 5 Wild Pandas delivers the highest single-line payout of 3,000 credits. The Panda substitutes for all other symbols (except Scatters and Pick Me), paying double payouts for all winning combinations the Panda helps to create.

The Panda Mania sign is the Scatter symbol, and pays bet multipliers of 1x to 100x when 2 to 5 appear anywhere on the reels. Additionally, if 3 or more Scatters land, 10 free spins are awarded, with all pays doubled during free spins. Note that the Escaped Panda Bonus occurs more frequently during free spins.

Pandamania also presents players with a favorable Pick Me Bonus that triggers when the Pick Me Pad Lock appears on reels 2, 3 and 4. The player will pick from three boxes, each containing a prize. Revealing the single Cash Prize awards that prize and returns the user to the base game. Choosing the Cash Prize + Pick Again releases the prize and allows the player to pick another box. The third is a Win All symbol, instantly rewarding all prizes.

Now that NextGen has converted this online slot for mobile play, it can be found at dozens of tablet casinos available in Canada and beyond.