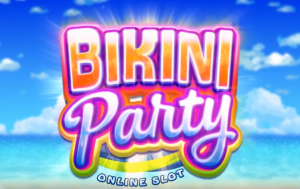 Online slots come in wide variety of styles and themes, but it’s not often they are designed to target a gender-specific audience. Having previewed Microgaming’s upcoming release of Bikini Party, I can say with absolute confidence that male players were specifically targeted in the software developer’s latest design.

Bikini Party Online Slots won’t hit Microgaming casinos until early February 2016, but I’m fairly certain that a sizeable group of men are already salivating in anticipation. This new slot features 5 young ladies playing volleyball on the beach, while scantily clad in the skimpiest of bikinis.

Let’s take a closer look at what these cute gals will bring to the online gaming table come next month.

For the most part, Microgaming seems to be keeping the rudimentary elements of this new online slot machine under heavy wraps (unlike the ladies who adorn its reels). The Bikini Party promo video only divulges a bit of information, including the payout system’s 243 Ways to Win function, and the presence Wilds and Scatters that produce Free Spins. 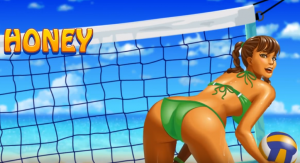 We can also see that, aside from the lovely ladies and Wild/Scatter symbols, the only other images on the reels are generic playing card numbers (9, 10, J, Q, K, A), and they aren’t even thoughtfully or thematically created. It’s pretty obvious the designers put their entire focus on fabricating gorgeous (near-naked) ladies as eye-candy for male slots players. One look at “Honey” and you’ll surely agree.

The Beach Party Logo is the Wild, taking place of any other symbol (except Scatters) to create the highest possible winning combination.

The beach ball symbols are Scatters, and award 15+ free spins anytime 3 or more appear on the reels. The background changes from clear blue sky to a tangerine sunset to denote the change in gameplay. What’s more, all payouts are tripled with a 3x multiplier during free spins, making this Bikini Party’s most lucrative feature.

The slots game also provides a rather unique attribute known as the Reel Re-Spin. During the base game, anytime the reels line up in a way that almost creates a huge win, the player is given the option to pay additional credits to re-spin the reel that didn’t contribute to the would-be win.

For example, if Kiki shows up on reels 1, 2, 3 and 5, but misses on reel 4, the player can re-spin the 4th reel in hopes of landing Kiki, or at least a Wild symbol, to complete the 5-symbol winning combination.

Overall, Bikini Party Online Slots may be geared heavily towards the male audience, but it seems to incorporate enough of Microgaming’s popular elements be more than just eye-candy.