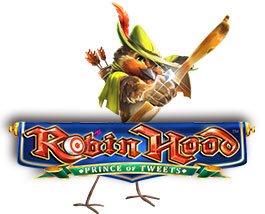 When I first heard the title of NextGen‘s newest online slots creation – Robin Hood Prince of Tweets – I thought the interactive games developer had gone off its rocker, turning Robin Hood into a social media crazed typist. That’s actually not the case (for which I’m very thankful!) Instead, NextGen took the classic human heroes of the original Robin Hood Prince of Thieves, and turned them into cute little birdies.

Aside from the adventurous new theme, the online slot’s features are fairly typical. You’ll find wilds, scatters, free spins, a special Arrow feature to spice things up and, of course, NextGen’s exclusive SuperBet function that allows players to increase the odds of winning by scaling their bets higher.

All in all, it’s got an imaginative motif, cute graphics and great potential for lucrative entertainment. Let’s take a closer look at what Robin Hood Prince of Tweets has to offer.

This new online slot machine has a typical 5-reel set with 40 paylines. It has a distinct fairytale feel to it, and a soundtrack to match. The minimum/maximum bet ranges from as little as $0.20 to as high as $50 per spin. It’s available for all major gaming platforms, including mobile and tablet. 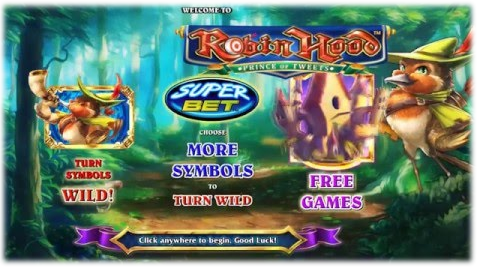 Set in the mythical Sherwood Forest, Robin Hood takes the form of – what else – a robin, donning the classic attire of the original Robin Hood (with a few tailored modifications, of course). Other symbols include the lovely princess, an alcohol-loving owl, a pouch of gold coins, an adorable tree-house castle, wanted poster, bullseye target, quiver of arrows and a few playing card symbols.

Robin Hood is the wild and takes the place of any other symbol necessary (except scatters) to create a winning combination.

The Arrow feature gives Robin the ability to turn adjacent symbols wild, too. However, the power of this feature has everything to do with the SuperBet feature.

If the SuperBet is not activated, Robin is only able to turn the Princess symbol wild. Raising the SuperBet to $0.30+ (Level 1) allows Robin to turn owl and gold pouches wild as well. Increase SuperBet to Level 2 ($0.80+), and adjacent bullseye, wanted poster and quiver symbols will also convert to wilds.

Last but not least, Robin Hood Prince of Tweets dishes up free spins when 3 or more Scatters – the tree-house castles – show up anywhere on the reels in a single spin. Landing 3, 4 or 5 Scatters will award 15, 20 or 25 free games respectively. During free spins, whenever Robin’s Arrow features turns a neighboring symbol wild, that wild also has the ability to turn its neighbors wild, according to the same SuperBet feature described above. Thus there’s potential for a screen full of wilds.