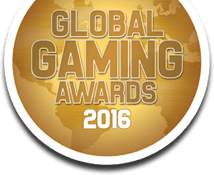 Microgaming is one of the biggest names in the online and mobile gambling community. It should be, having built the very first online wagering platform in 1994, when those of us with internet access were still suffering through dial-up connection speeds. Now, more than two decades later, the company is still being recognized for its innovations and achievements.

On Monday, September 26, while the majority of us were out and about, doing whatever it is we do on a typical Monday, the heads of Microgaming were gathered in the Congress Center of the Venetian Palazzo in Las Vegas, Nevada, where the 2016 Global Gaming Awards ceremony was taking place.

With nerves taught as a deer-skin drum, all in attendance eagerly awaited the announcement of each of the 12 categories’ winners, chosen by a panel of 60 expert judges.

Microgaming officials were beyond proud when their dedicated software platform, Quickfire, was named as Digital Product of the Year. This marks the third year in a row for Microgaming Quickfire, having been bestowed with the exact same award at the 2014 and 2015 ceremonies – a true honor in one of the industry’s most competitive categories.

Microgaming Quickfire Does It All

Quickfire was developed by Microgaming in 2010 as a singular platform capable of running all of it its multiple interactive gaming avenues. This single platform is equipped with the brand’s internet casino, poker, bingo, live dealer, multiplayer and mobile gambling software.

Prior to such innovations, operators of multi-venue gaming sites were commonly installing a variety of platforms to give players access to each form of gaming. Quickfire changed all that, spearheading a movement towards single-platform simplicity that helped grow Microgaming’s clientele to a supremely impressive 400+ licensed operators in 2016.

“This win highlights the incredible progress of Quickfire since launching in 2010,” said an enthusiastic Andrew Clucas, Microgaming’s Director of Quickfire. “The platform has emerged as the product of choice for operators who require immediate access to the best online gaming content from Microgaming and select development partners. It’s great to see the industry celebrate the content, flexibility and innovation of Quickfire.”

Alexander Hammond, an Editor for B2B media giant Gambling Insider, offered up considerable praise for the world leading software development brand. “Congratulations to Microgaming, one of the biggest names in the digital supply industry who has once again had a tremendous year, spearheaded by this year’s digital product of the year, Quickfire.”

Another Microgaming ingenuity, Bablefish API, which runs on the company’s MPN online poker network, was named runner-up in the esteemed category of Digital Gaming Innovation. That award went to NYX Gaming Group.

The following is a complete list of the 2016 Global Gaming Awards Winners. Our sincere congratulations to the hard working teams at Microgaming and all other winning brands who earned such an admirable place on this list.