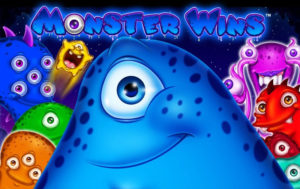 I’ve played a lot of mobile slots game titles in my day. Some were great, some were terrible, others were just average. While I generally prefer to share my enthusiasm over the best slots for tablets and smartphones, today’s Monster Wins Review is, unfortunately, quite the opposite.

NextGen, the idealistic software giant that released Monster Wins in June of 2016, is generally known for its innovation in mobile slots games. Rich features, aesthetics and overall entertainment value are, more often than not, a prominent feature of the software development team’s creations. Sad to say, they sure missed the boat on this one.

If you’re anything like me, the moment you load up this relatively new mobile slot game, you’ll be instantly reminded of the Disney Pixar films, Monster Inc. (2001) and Monsters University (2013) (minus all the fur). It’s crawling with vibrant creatures, blinking anywhere from 1 to 5 eyeballs.

The highest payout comes from the Bonus symbol’s Scatter Pays, where 5 Bonus scatters are worth a 2500x payout. Again, that sounds great, except that it adds up to just $12.20.

The mobile slots game also comes with a Wild symbol. It has no special functions, playing the traditional role of taking the place of any other symbol (except scatters) to help create winning combinations. That wouldn’t be so bad if it wasn’t restricted to landing only on reels 2, 3, 4 and 5, greatly reducing the number of wins that could have from from a single Wild landing on reel 1.

There’s a special feature called Unleash The Boss Monster, represented by a blue, 5-eyed creature. It’s actually the highest paying standard symbol in the game, worth 100x for 5 on a line. This symbol has the ability to appear stacked on reel 1, and if it does, it will unleash more Boss Monster symbols randomly onto the screen.

There’s an added chance you’ll get up to 5 Boss Monsters on a line when the feature is activated, but remember all wins are divided by the line bet. Even with a $5 spin, that 100x payout is reduced to less than $0.50 ($0.488)

There is one bright side to our Monster Wins review, and that’s the fact that the game does come with a Free Spins feature. If only they gave you a decent amount of them when awarded…

When 3 or more Bonus Scatter symbols appear anywhere on the reels, players are awarded 3 free spins. No, that wasn’t a typo. 3 free spins is all you get.

In an (unsuccessful) attempt to make up for this, the mobile slots game’s developer decided to install Stacked Monster Boss symbols on the first reel during all free spins, and make them re-triggerable. Can I get a whoop-whoop? No? Didn’t think so.

Thanks, but no thanks. Despite the low variance that brings a high rate of winning combinations, the pay table on this mobile slots game is so abysmal, it’s a monstrosity. NextGen should be ashamed of themselves.