Every day it seems there’s a new tablet slots game available to play from one digital gaming developer or another. It’s incredibly rare, however, that any truly innovative or fresh concepts come along. With thousands of games already on the market, jut about anything that can be done, has already been done – right?

Apparently not. The visionaries at GameArt, a relatively young developer of land-based and online casino games, actually managed to come up with a fresh idea. You’ll find it integrated into the team’s new tablet slots game, Money Farm 2.

With this unique bonus feature, whenever free spins are triggered, players get to spin two complete reel sets – not just one. As the free spins play out, it’s possible to earn up to 4 reel sets, simultaneously spinning away, until the free games are over. 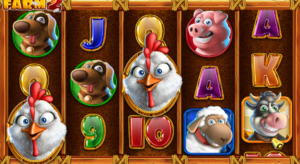 If you’ve ever played the original Money Farm slot by GameArt, this new version will look very familiar. It contains all the same graphics, from the cartoon-style farm animal characters, right down to the background imagery.

The developers only changed two things in this 5 reel video slot. The number of paylines was increased from 5 to 25, and the free spins bonus feature was dramatically altered to be much more entertaining, and rewarding.

Just as before, the Chicken is the Wild symbol in the new tablet slots game. But instead of appearing only on reels 3, 4 and 5, it can now appear on any reel, substituting for any standard game symbol to help create winning combinations.

The Egg is the Scatter, and will trigger 12 free spins whenever 3 or more appear. This is where the game gets most interesting. All free spins start with two reel sets, instead of one. Essentially, the player is getting twice as many free spins – 24 instead of 12. But it gets better. 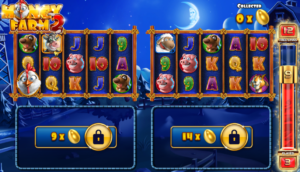 During free spins, a new special symbol can appear on the reels – the Golden Egg. Every time a Golden Egg appears, it is collected at the end of the spin. If a player collects 9 Golden Eggs, they will earn a third reel set for the remainder of the free spins. Additionally, the 5th reel on all reel sets will become wild with stacked Chickens for all remaining free spins.

Golden Eggs will continue to be collected, and if the basket fills with 14 of them, a fourth reel set is awarded. All 4th reels will also be filled with Wild Chickens for the remainder of the spins. Last but not least, collecting 30 Golden Eggs will turn all 3rd reels on all reel sets wild as well.

I actually had a lot of fun playing this new tablet slots game. I really enjoyed its playful theme and festive barnyard music. I was able to trigger the free spins pretty quickly, within the first 10 spins, but it never struck again for me. I also never managed to earn a 3rd reel set (only 7 Golden Eggs for me).

On the bright side, the game’s medium variance was a big plus. Spinning at $0.25 per play, my $20 bankroll lasted quite a while – more than 200 spins before it ran dry. Despite losing, I still enjoyed the game. I’ll play it again, and hope for better luck on the free spins.