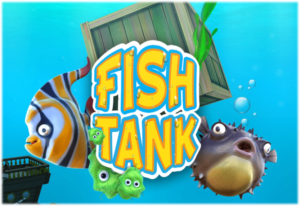 If you enjoyed Finding Nemo, chances are you’ll love the new tablet slots game from Magnet Gaming. It’s called Fish Tank Slot, and it’s one of the most immersive games I’ve experienced yet, dragging players far beneath the ocean waves, where tropical fish and long-buried treasures await.

Based in Denmark, Magnet Gaming is a relatively new software development firm, utilizing HTML 5 and WebGL technology (3D rendering) to deliver realistic, HD quality games compatible with all major desktop, smartphones and tablet devices. The company has 16 slots titles in its portfolio thus far, including the recently released ground-breaking game, The Vikings: Wheels of Vahala.

The new Fish Tank Slot is another admirable title, giving players the genuine experience of watching a soothing, deep-sea aquarium as they play. As for profitability, it features a pair of progressive jackpots and a trio of bonus rounds to hunt for. 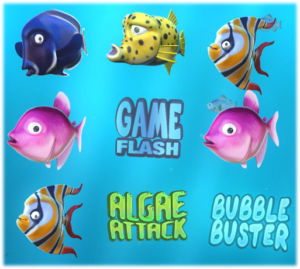 The new tablet slots game’s symbols include a variety of exotic fish, including a seahorse, moorish idol, puffer fish, balloon fish, goldfish and more. There are also 4 Scatter symbols that have special functions, including the Game Flash, Algae Attack, Bubble Blaster and Feeding Frenzy symbols.

Re-Spin Multiplier: Every time a winning combination pays a prize, players receive a free re-spin with a progressively increasing multiplier. The first re-spin gets a 2x multiplier, and if that results in a win on any line, another re-spin will be awarded with a 3x multiplier, and so on.

Game Flash: The Game Flash is a scatter that triggers a special game when 3+ appear anywhere on the reels. The screen will display five possible prizes; two instant credit prizes and the game’s three bonus features, Algae Attack, Bubble Blaster and Feeding Frenzy. A fish net dips in to remove one prize at a time, with the final remaining prize being the players reward. 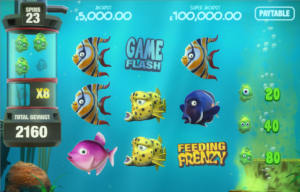 Algae Attack: The Algae Attack Bonus gives players 25 free spins, during which they will try to collect algae in a pump. There are three types of algae, with increasing credit values – 1-eyed algae (100), 2-eyed algae (200) and 3-eyed algae (400). Collected algae are stored in the pump on the left, and every time 5 are collected, the Pump Value increases the multiplier, up to 10x. Once 10x is reached, filling the pump again awards the smaller Fish Tank Slot progressive, Jackpot Flash.

Feeding Frenzy: Feeding Frenzy mimics a board game. Players have 10 dice rolls to progress on the board, collecting credits and eating fish food. There’s more than one fish that can be moved, so choose wisely. Eating 3 fish food will trigger the Jackpot Flash, and eating an additional 3 fish food triggers the new tablet slots game’s larger Super Jackpot Flash progressive.

Fish Tank Slot – Is It A Winner?

The Fish Tank Slot comes with an RTP (return to player) of 96.5%. I generally prefer the 97+ variety, but they’re getting harder to find these days. This is a medium- to high-variance game, which means players won’t be hitting winning combos very often.

In my experience thus far, you have to hit one of the bonus games to have any hope of a profit. The base game rarely sees a winning combination, and when it does, it doesn’t pay enough to keep your bankroll stocked. The bonus games are where the real money is, and they can be very rewarding! If you have a good size bankroll and enough patience to wait out a bonus, you may really enjoy it.

If you want try the new tablet slots game for free first, you can play the Fish Tank Slot Demo here.