Play’n Go is hopping on the 720 ways-to-win bandwagon with its upcoming mobile slots release, Mermaid’s Diamonds.

It’s not easy to come up with a new idea in the slot machine industry. After more than a century of staggered innovation, fresh concepts are hard to come by. When developers found a way to alter the reels with an odd, rhombus shape, it delivered a player-friendly 720 ways to win. Now it seems every major slots maker in the digital realm is copying it.

IGT started the trend with games like Hexbreaker 2, Siberian Storm (right) and Sumatran Storm. Microgaming followed suit with Pollen Party, as did NetEnt with Wild Rockets, and they spiraled from there.

If these were traditional payline slot machines, such a structure would work largely in the casino’s favor. But these are 720 ways to win slots. That means winning combinations will strike so long as the matching symbols appear next to each other, not just from left to right, but also right to left.

Like so many before them, Play’n Go took the diamond-shape pattern of 720 ways games and built a new mobile slots title around it. They even used the word ‘Diamonds’ in the name, associating them with the most famous mythical creatures of the deep blue sea. 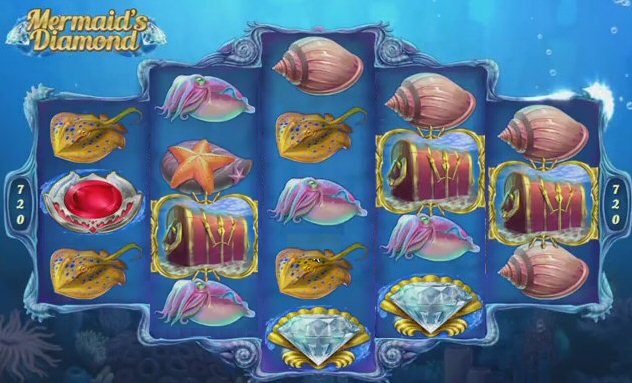 Mermaid’s Diamonds has a cool, serenely blue accent, encapsulating the wonders of the ocean. The musical score is strangely ominous, as if something dreadful could happen any moment. It’s an odd contrast to the tranquility of the graphics, but not uncommon in this business.

Symbols include long-lost treasure chests, conch shells, beautiful aquatic life and colorful jewels, including the gleaming namesake, Mermaid’s Diamonds. The top prize pays 5000x coins, which isn’t too bad for an ‘all ways‘ game of this nature.

There are a few features worth noting here. The Trident Wilds feature triggers at random, wherein a virtuous force sweeps across the reels to infuse them them extra wilds.

When this occurs, the player will select one of the five chests to reveal the number of free spins they’ll receive (10 to 25). During free games, the Trident Wild feature activates more often. Players can earn additional spins for landing 3+ scatters, worth 1 free spin per scatter. Last but not least, a meter appears atop the reels to collect diamonds. Once 5 diamonds are collected, one random reel will turn completely wild for the next spin.

The new mobile slots game is set for release next week, and it’s most definitely high volatility game. Having had a chance to try it out myself, don’t expect a good volume of wins in the base game. Fortunately, the free spins aren’t as rare as the rules make them out to be. Once that feature strikes, the winnings begin to flow like the incoming tide.