Turn your calendars back a few years, and we find a series of most-fortunate events culminating into an elite partnership between two of the largest gambling software companies in the world.

Now fast-forward to present day, and we find Evolution extending its partnership with Scientific Games to produce a more robust variety of live casino poker games. 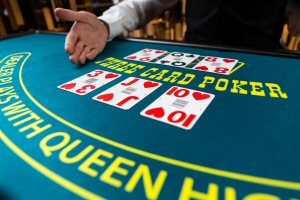 For years, Evolution Gaming has been the proven leader in online and mobile live casino technology. The company has earned EGR‘s esteem for the last 8 years straight, taking collecting the award for Casino Supplier of the Year from 2010-2017.

If there’s one area where Evolution lacks, however, it’s overall game variety. Although its studios and software are unparalleled, other companies like Playtech have surpassed the brand in terms of avalable game titles. But Evolution may soon claim that crown as well.

According to a press release issued on Friday:

“Evolution has extended its rights to include world-famous titles that will further expand Evolution’s live games portfolio over the coming years, including exclusive rights in Europe to Three Card Poker and Let it Ride.”

The extensive contract gives the Stockholm-based company exclusive rights to produce live casino content using Scientific Games-branded casino poker titles. The press release did not indicate the full range of games in which Evolution will emulate on its live gaming platform, but the potential is astounding.

Scientific Games is the developer of dozens of land-based casino favorites. Its SHFL subsidiary owns the rights to numerous blackjack and pai gow variants, and a throng of popular side bets for blackjack, baccarat and craps. It’s also responsible for popular progressives, hold’em oriented games, and specialty titles like Let it Ride, High Five Poker and Mississippi Stud.

“We are the biggest Live Casino provider in the world and they are the largest proprietary table games supplier in the world, so offering their games in Live Casino to our partners for many years to come is a win-win,” he explains.

Eluding to the impending content to come, Haushalter says, “We already offer two of their great games, Three Card Poker and Ultimate Texas Hold ’Em — and now we will expand that to many more games and side bets.”

He goes on to call Scientific Games’ vast collection of gambling content, “some of the greatest table games available anywhere in the world”. Evolution is looking forward to enhancing their own portfolio of live casino poker games, ensuring their clients and players “have the very best content available to them”.

He is confident that the multi-year extension will bring both companies, and Evolution’s mobile live casino card games library, “to the next level”.