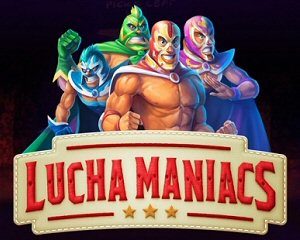 Developed for seamless game play at desktop and mobile casinos, Lucha Maniacs combines the innovative features Yggdrasil is so well known for, with the unparalleled excitement of Mexican wrestling.

I gave this new wrestling slots game a try this morning. After just a few minutes of play, I have to say the music got pretty annoying. It’s an upbeat mariachi score, befitting of the game, but way too much for me, especially that early. Graphically speaking, though, it’s a great creation. 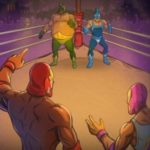 Lucha Maniacs is played on 5×3 reels with 20 fixed paylines. It has your basic playing card suits as low paying symbols, and four masked ‘loco luchadores‘ (wrestlers) on the high-paying end. Other symbols include the golden Wild, and wrestling ring Bonus.

Landing 3, 4 or 5 Bonus symbols will trigger 7, 15 or 30 free spins, plus 3 features throughout. When just 2 Bonus symbols appear, players will get to select a poster of one of the four wrestlers to reveal a prize. Optional prizes include instant credits or a third Bonus symbol. If the third bonus symbol appears, players win 7 free spins with 3 features.

There’s also a Golden Bet feature that players can activate before any spin. It costs an extra 5 coins to do so. If active when free spins are triggered, it will add +1 feature to the free games.

When free spins trigger, a comic-style cinematic takes place as the four luchadores head to the ring in hopes of huge cash rewards. Players will get to choose feature tokens to activate before the free spins start. There are 7 possible features to choose from:

During free spins, landing additional Bonus symbols will add more spins and features to the match.

Re-triggering free spins several times over could result in an incredible mixture of features, and an awesome payout potential! Unfortunately, I was unable to experience anything like that. It took about 400 plays for me to trigger free spins, and that was by landing 2 Bonus symbols and picking the third from a poster; (my fourth try at doing so). No other bonus symbols came for me during the spins.

Lucha Maniacs Slot boasts a 96.2% RTP, which is pretty average. Based on my session, you’re going to have to get lucky with bonuses to get anywhere near that.