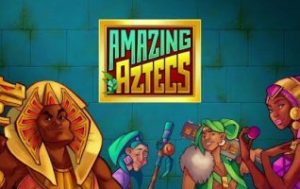 The month of May is upon us, and that means the world’s leading developer if digital gambling software will be releasing at least two new Microgaming slots games. One of them, announced just a week ago, will be the Amazing Aztecs Online Slot, due for release on May 31, 2018.

This particular title has been created by one of the company’s exclusive independent games studios, Just For The Win (JFTW). Amazing Aztecs transports players deep into the Amazonian jungle, where the ancient treasures of this bygone civilization await. But does it have enough features keep players entertained?

The Amazing Aztecs Slot is a 5×3 reel game with 243 ways to win. Instead of specific pay lines, all possible combinations, aligned from left to right, will result in a win. It’s rich in graphics and includes a culturally thematic musical score. High-paying symbols include characters from the Aztec culture, with vibrantly ornate jewels on the low-paying end. 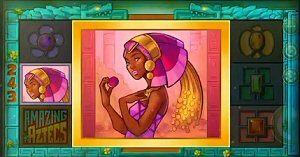 At random, any winning spin can award players with a Giant Re-Spin. The music becomes more dramatic, and one of the symbols involved in the win will suddenly expand to cover a larger position on the reels. That symbol, in 2×2, 3×3, and possibly 4×4 segments, will spin down over the reels until coming to a stop, guaranteeing a win of some size.

Although the reels are only 5×3, it is possible for a massive 4×4 symbol to land during the Giant Re-Spin. The top or bottom section will be cut off, but because the symbol covers 4 rows across and 3 down, an ‘Epic Win’ is sure to occur.

Microgaming has released its teaser video for the new JFTW slots game. You can preview it below.

Based on the information provided therein, I’m not sure sure how successful this game will be with the desktop and mobile gaming masses. While the Giant Re-Spin feature is interesting – if not new – no other features are present. There are no wilds, scatters, multipliers, free spins or other bonuses to play for.

If that’s all the game has to offer, I don’t imagine it will be a huge hit. It doesn’t even offer a comparably high return to player. With an average 96.08% RTP and medium variance, my expectations for the game are already low.

I have been fairly impressed with JTFW’s previous slot creations for Microgaming. Goldwyn’s Fairies was a big hit in May 2017. Lucky Links is still drawing a lot of action from players, as is their most recent addition, Deco Diamonds. What all of those games have in common is – you guessed it – player-friendly features. Wilds, scatters, free spins and/or bonus games – all of the things today’s mobile casino gamers crave most.

Those who prefer a relaxed experience without too much fanfare might enjoy this one. But overall, the Amazing Aztecs Slot simply doesn’t have much to hold the attention of more high-energy players. The new Microgaming slots game will arrive May 31, 2018.