Save the penguins from the evil emperor in Penguin City, new from Yggdrasil in August 2018. 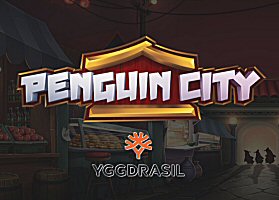 Is there a special place in your heart for our flightless friends, the penguins? Are you a fan of interactive slot machines with captivating back stories? If you answered yes to both, you’ll absolutely love Yggdrasil‘s latest release, Penguin City Slot.

Yggdrasil is famous for giving its online slots games a thick and entertaining plot to double the enjoyment for players. That’s exactly what Penguin City brings to the virtual table. It carries a medium variance, 96.2% RTP, and is compatible with all major desktop and mobile operating systems.

Released just days ago, the game’s impeccable 3D graphics and animations bring this darkly hilarious story to life. Players are invited to help rescue the penguins from the evil Emperor Penguin, and hopefully win a lot of cash along the way.

Note: No actual penguins were harmed in the making of Penguin City. As for digitally rendered penguins, well… that’s another matter.

The intro alone is worth watching, so don’t skip it. Afterwards, you’ll find Penguin City to be a graphically rich, 5×3 video slot with 243 ways to win and a min/max bet range of $10.10 up to $125 per spin. Wins pay in both directions across the reels (left to right, and right to left), with an opportunity to unleash more than 1500x the total bet per spin.

Penguin City is set in a seemingly tranquil Asian marketplace, where a hoard of cute little penguins go about their daily, culinary tasks. You’ll see them rambling about in the backdrop during game play. The symbols include an array of Oriental comestibles and cookware, plus low-value playing card suits.

The wild symbol only appears on reels 2 and 4 and takes place of any other symbols in the game. If it appears in a winning combination, it will remain on the screen as a sticky wild for the following spin, and triggers the game’s most interesting feature, Penguin Escape Mode.

When activated, one penguin will attempt to escape the kitchen by…. well, I won’t spoil it by telling you how they do it. Suffice to say, an attempt is made. If successful, another wild is thrown onto the reels if the previous spin was a winner. If it was not a winner, a successful escape will include the penguin swapping out symbols on the reels to create a winning combination. The reels spin again in hopes of another successful penguin escape. The Penguin Escape Mode ends when no winning combinations appear.

During Penguin Escape Mode, the dastardly Emperor Penguin, arch nemesis of the little penguins, can appear on the central reel as a stacked wild. He guarantees a win when he shows up, but those poor little penguins won’t dare make a run for it when he’s around. The Emperor Penguin stacked wild will move down the reels one position for each successive spin—guaranteeing wins along the way—until he disappears beyond the 5th reel.

Yggdrasil loves to throw new and interesting twists into their games. Penguin City Slot features a unique multiplier system wherein landing alike symbols on the same reel institutes a multiplier for any wins utilizing those symbols.

For instance, look at the figure on the right. It depicts a total of 7 Chinese food containers on reels 3, 4 and 5. Because they appear in a winning combination, the three on reel 3 deliver a 3x multiplier, while the two on reels 4 and 5 each award a 2x multiplier.

Because multipliers stack, this combination now pays with a 12x multiplier. Three Chinese food containers are usually worth a 25 coin payout, but with the 12x multiplier, the payout becomes 300 coins.

You can try out the humorously entertaining Penguin City Slots, new from Yggdrasil, at any online casino that employs the developer’s extensive portfolios of games.