Quickspin releases Ark of Mystery, and other new slots at Playtech casinos. 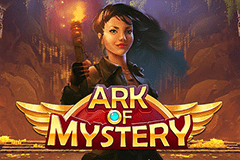 It’s been a busy few months for the design team over at Quickspin. A subsidiary of Playtech, Quickspin has ramped up its digital games output lately, delivering one new online slot machine per month since August. And it looks like things are going to get a lot more interesting come November, when a trio of new titles are due for release.

This new game from Quickspin is packed with 5 reels, 20 paylines, and crystalline graphics, but isn’t too fancy in the feature department. Specifically, there are no free spins in Ark of Mystery—a rare non-occurrence in today’s digital slots realm. But there are some other interesting features that help make up for it.

First is the Wild Ark Respins. The ark is the wild symbol, appearing only on reels 2, 3 and 4. When it does, it substitutes for any other symbol (except Multiplier Boosters) to help build winning combinations, left to right. Whenever a wild ark appears—win or lose—it triggers a free respin. Before each respin, the wild ark will replicate, spreading another ark to an adjacent position on the same reel, and guaranteeing at least one more respin. All ark symbols on the screen will remain in place for respins. Players can trigger up to 6 consecutive respins.

The only other feature in the Ark of Mystery slot is the Multiplier Booster. This special symbol, represented by a pyramid, only appears on reel 5. For every booster pyramid that appears, the multiplier increases by 1x. If they appear on consecutive spins, the multiplier continues to grow, up to a maximum of 21x, while paying the corresponding amount on any winning combinations. If no pyramid appears on a spin, the multiplier resets to 1x.

Ark of Mystery boasts a respectable RTP of 96.53%, with a medium volatility. The variance ensures a perfectly balanced mix of payout size and hit rate frequency, wherein the wins come often enough to maintain an entertaining experience, without paying in such small amounts as to disguise most losses and wins.

As I mentioned above, Quickspin is really picking up the pace these days. In August, they released Hidden Valley, followed by Big Bot Crew in September, and this month’s launch of Ark of Mystery. November will be their biggest month since the company’s initial launch, when at least three brand new games are scheduled to come to market.

First, on November 11, 2018, Quickspin will deliver a game known simply as “Ivan”. They’re keeping a close wrap on this one, with no details or even graphic teasers to pique our interest—that alone is piquing our interest! But we’ll just have to wait and see… Then, on November 13, Quickspin will releases a pair of animal-themed new slots at Playtech casinos; Tiger’s Glory and Buffalo.