According to history, the Vikings weren’t really known for their patience. They were more of a ‘if you want it, go take it‘ kind of people. Fortunately, today’s modern society tends to operate a bit more longanimously. Fans of the hit television series, Vikings, have been waiting nearly a year to experience the 5-year History Channel sensation as an online slot machine.

That wait is finally over. After announcing a contract with the series’ production company back in February, digital games designer NetEnt went to work for the next nine months on the branded slot machine project. Yesterday, November 22, 2018, the Viking Slot made its official debut at NetEnt powered online casinos.

Obviously, the big draw for this game is its enormous popularity as a television series, creating a familiar cast and landscape setting that most can relate to. Also familiar are some of the player-friendly features, such as a 5×3 reel set with 243 ways to win (aka all ways, left to right); expanding to a phenomenal 78,125 ways to win during the bonus feature.

All of the main characters, including Ragnar Lothbrok, Legartha, and Bjorn Ironside, grace the reels as high paying symbols of equal value. They come in single-position icons, as well as stacked, icons. The Vikings “V” logo is the highest paying symbol, with 10-A playing card values on the opposite end of the spectrum.

The game has a bet range of $0.20 up to $100, and a max payout of 1,000,000 coins per spin. The Vikings Slot presents a number of special bonuses, and introduces two new features from NetEnt, known as the Hotspot and Shield Wall features.

Hotspot Feature: The new Vikings slot machine comes with a Hotspot feature in which the central reel seeks out stacked Vikings character. If a single character’s stacked symbol appears in full on this reel, it triggers Scatters Pays. All Vikings characters on the screen at that moment will transform to match the Viking in the Hotspot prior to awarding Scatter Pays. Afterwards, in the base game, the player receives anywhere from 6 to 4,860 coins for 3 to 15 Vikings on the screen. If Hotspot is triggered during the Raid Spin feature, the player win can be as high as 200,000 coins for up to 27 Vikings on the screen.

Raid Spins Feature: The equivalent of a free spins feature, Raid Spins trigger when a Raid Spin Shield appears on reels 3, 4 and 5 in the same spin in the main game. The standard 5×3 reels will expand to 7×5, increasing the usual 243 ways to win up to a massive 78,125 ways to win for 7 free Raid Spins. 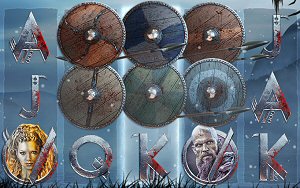 The hotspot section also expands to cover a 3×3 section in the center of reels 3, 4 and 5. The Hotspot Feature will activate, as described above, if a stacked Viking character appears in full in one of the three Hotspot columns.

Shield Wall Feature: Activating at random in the base game or during Raid Spins, the Shield Wall Feature will instantly erect a shield wall covering a position of no less 3×2 on the reels. After a moment, all the shields will disappear, revealing the same Vikings character beneath each one, then delivering a guaranteed payout of some size.